Here it is! My TEDx Talk is finally online.

You can find it here: https://www.youtube.com/watch?v=g6VgDuuZaao. Hope you like it.

In a world of fierce competition the key to success could be a very unsuspected one. How can a small business consistently beat larger contenders and retain strategic talent six times longer than companies like Google?

On the morning of February 22, I sold my company.

I founded Tango/04 in my living room; we made it a profitable multinational business with offices in six countries, more than one hundred talented employees and well-known enterprise customers in over 50 countries.

But beyond that conventional achievement, Tango/04 reached other kind of success.

We had so many fans. Customers were friends. We maintained relationships with them for decades. They came year after year to our symposiums and we enjoyed our time together. We had distributors that were loyal to us for more than twenty years. Our employees felt like they were in a family. And every day we had fun.

Despite being much smaller, we were able to win against IBM, CA, BMC, and HP. In some countries we had more clients in the financial sector than the entirety of our competition added up. And no, we were not cheap.

What was our secret? In retrospect, we probably weren’t too bad at marketing, community nurturing, technology and innovation.

But our real secret was a different one.

I am shocked that this is not a subject of study today at MBAs and most universities. And yet it is such a basic thing.

You may call it affection, sensitivity, kindness, empathy, whatever you want. I think that the proper name is love, although this word seems to be a taboo in the corporate world.

Love was present in every single act of ours.

When we worked hard to solve customer problems or to iron out bugs, there was love. When we interviewed prospective employees, when we provided second chances to failing team members or even at termination time, there was love.

Hey, I do not mean that we played romantic music at work or that our engineers were french-kissing each other. But we did give our people trust, freedom, responsibility, a gym, games, beverages, acting classes, careers, care. Lots of care.

My partner Carlos, for instance, spent countless hours listening to people that felt uneasy for any reason, even for causes alien to the business. And we always gave our best advice even when it was against the company interest.

We gave our customers the best of us. We put tremendous, sincere effort in helping them out, using fairness, altruism, smiles and good faith.

Simply put, when we made decisions, money was never above people.

Tom Peters is a long-time advocate of all this. He claims that the hard stuff (engineering, product development, financials) is soft, but the soft stuff (the human side) is really hard. I can’t agree more.

Sadly, empathy is not even in the radar of some businesses.

When love is stronger than greed, ethics is a byproduct. So we did not have to worry about integrity, trust, good faith, and such. The opposite is also true: when money is king, principles and values are usually just a poster on the wall.

We entrepreneurs do not create companies: we create cultures. And a strong, empathetic culture creates its own antibodies. Those who do not share the values end up ejected sooner or later. Usually sooner.

There is another byproduct of love: happiness. We were happy people having fun, and happiness is contagious.

Some people did not value this. Some people did not even notice. But most did: our average employee tenure was 7.28 years. Which is astronomical for the IT sector (Google’s is only 1.1 years, for instance). We kept key talent despite of several bubbles and intense headhunter attacks.

Many guys even returned to the company after quitting – when they realized Tango/04 had, in fact, a secret.

So, what is the most important lesson I learned after twenty five years of entrepreneurship?

In a nutshell, that love is the ultimate competitive advantage.

But profound, genuine love only comes from the burning enthusiasm of doing what we enjoy the most.

So, when I felt that I was not feeling that kind of enthusiasm anymore, I knew that the time had come to pass the torch onto others. They will keep my former company special, I am sure.

And, considering that the world is still full of soulless enterprises, it is comforting that we the Tango/04 alumni will spread our DNA wherever we go.

And, for sure, a lovely one.

Do you want to know a secret?

I have never worked at a company such as Tango/04. I mean, such as the company I envisioned to create, back in 1991.

Children rapidly find a public figure to take as example when they start playing a sport. But it is much more difficult when there is no model to imitate. Even in life, in general, it is difficult to find far-reaching ethical models. But at least it is easy to find antimodels.

My antimodel were the monopolistic corporations of that time, such as Telefonica and Iberia, the Spanish phone and airline companies, whose customer service, back then, seemed to be led by highly sadistic people.

I wanted to work for a company that was just the opposite. And, luckily, we eventually found our way.

Well, soon I will reveal here the secret that made us compete and thrive in the tough IT market for more than 25 years. The ultimate key factor of our success, that is.

Just bear with me a bit more.

In May 2011 we had the pleasure to host Conor Neil at our Tango/04 Monitoring Symposium in Barcelona.

Conor, as you may recall, is a brilliant mind, an expert in human communication, a serial entrepreneur, a professor at one of the top business schools in Europe and a guru for thousands of people (including me). He spoke about speaking, which is, I suspect, his favorite subject.

If you weren’t there, I have good news.

Conor uploaded the initial part of the speech to his YouTube channel as an appetizer for his conferences. There he discusses how to start a speech – and, more importantly, how NOT to start it.

The video has already surpassed one million views! If you haven’t seen it yet, rush to Conor Neil : How to start a speech and enjoy yourself.

When we started this blog, CMDBs were all the rage. ITIL was at its peak. Practically every single customer asked us about our “CMDB strategy”.

From the start we had the vision that passing event, performance, and business context data through the already overloaded CMDB was a terrible mistake.

First, it was not a “best practice” as opposed to the rest of ITIL initiatives. Back then the number of existing companies around the world that had finished such a CMDB was zero. And it remains zero.

END_OF_DOCUMENT_TOKEN_TO_BE_REPLACED

Do you want to be much, much more successful? After introducing The Dilbert Factor at the Buenos Aires University in December and last month in an exclusive session for Catalonian entrepreneurs, I’ll be presenting at the itSMF/ISACA Congress in Barcelona this very Thursday (April 16th) the one and only “Engineering Success: The Dilbert Factor and other stuff I was not taught at the University”. Dilbert sessions coming up: one for Tango/04 customers in Argentina (May 5th) and hopefully many, many more (stay tuned).

The Dilbert Factor is my new keynote speech based on 30+ years of business / technical / life experience: a not-to-be-missed collection of academic and pragmatic practices to achieve success and be happier, taller and more handsome. Not all the stuff is guaranteed to work, though.

Yes, it’s that time of the year again. Got this quick 2014 summary for you, from Barcelona with love.

We launched Alignia, encapsulating the knowledge from hundreds of successful monitoring projects into a revolutionary software product.

Alignia allows you to control, optimize and align these nasty Business Applications, Business Processes, Online Business Services and Business Security in the Interconnected Era (hey, the Extended Enterprise is finally here… and you need to be ready for it).

It has been a major, multi-year, multi-million effort, and we can’t be happier with it. Alignia is rapidly getting traction among leading companies like yours all over the world as they realize that they can unlock lots of value in a matter of hours. (Yes, hours. And not that many.)

Corporate alignment between IT and the Business has never been this easy. Get the whole story here. You’ll thank me later 🙂

We kept adding talented staff, moved to bigger and better offices in Barcelona and we are remodeling our offices in Buenos Aires.

We keep gaining more and more customers in the financial sector. In some countries we help more banks that the whole competition together.

My mother passed away at the age of 86 on December 8th. She will be surely missed.

I also returned for a while to an old love of mine, cinema direction, and directed The CIO’s Office, a funny mockumentary that warns CIOs about the horrors they may face without Alignia 🙂 It premiered with a warm reception at our Tango/04 Monitoring Symposiums. Academy Awards, here we go!

I also celebrated the 25th anniversary of graduation from college at the University of Buenos Aires, which also invited me to give a speech there this month; it was a pleasure and an honor for me.

And when we say there will be surprises this Friday at the European Monitoring Symposium, we mean exactly that. But here is a little teaser.

Miss it at your own risk. 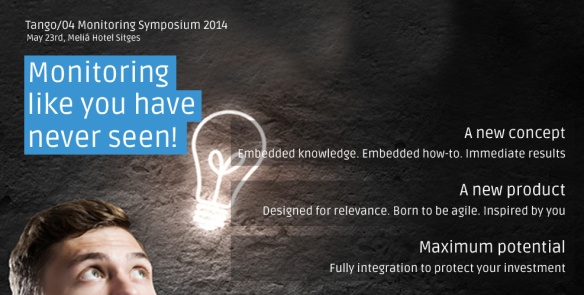 Well, it is because of all these as well. And it is because of the nice surprises (many of them), but the main reason to attend the Monitoring Symposium is to propel your career forward, to go further faster, whether you are a CIO or a CISO or you are one in the making.

Particularly now, when not advancing means going back.

Because monitoring, understood as Corporate Visibility, is really powerful stuff (hey, that’s what I’ve created this blog for). A wonderful opportunity that many pass on, and regret when it is too late.

And what we are introducing is completely new. Promise.

Well, I said it already. Now it is up to you.

Hope to see you in Sitges this Friday (May 23rd)! 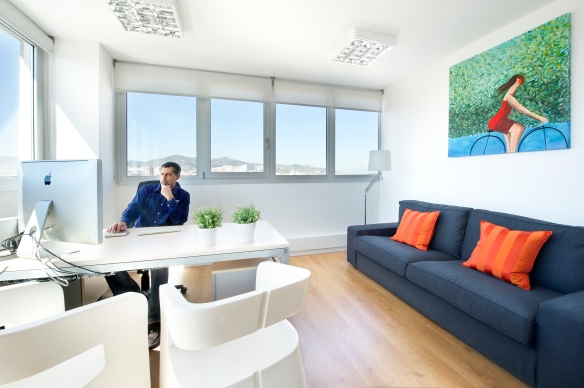 Where have I been? Quite busy, after the (awesome) inauguration of our new offices, preparing the super ultra mega wonderful amazing Tango/04 Monitoring Symposium 2014.

(You’ve already saved the date, right? May 23th in Sitges, a beautiful town near Barcelona).

But before talking about it, some photos of our beautiful new offices.

(Thanks to the great Egue y Seta studio for the spectacular project).

Suscribe to the RSS News Feed

Thanks for being here!

Top of the Tops